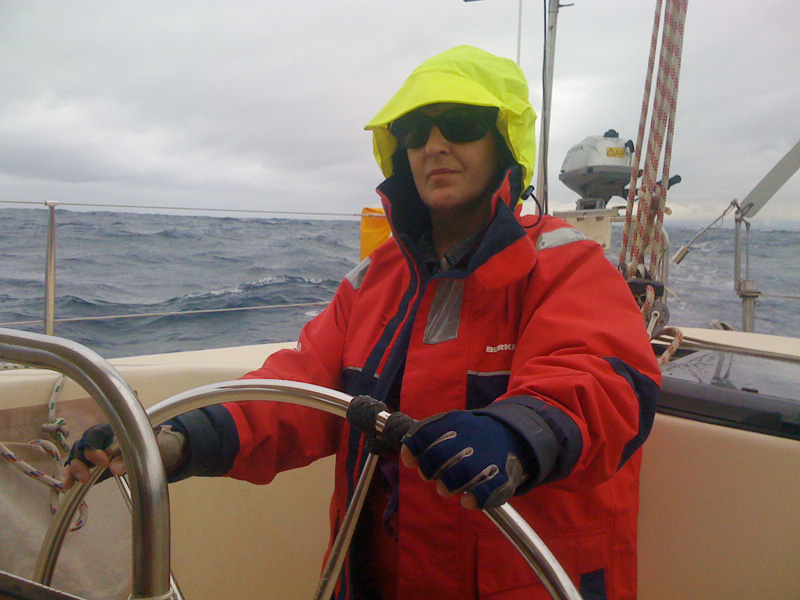 Guest blogger today is my partner Jen, who was born and raised in the country. She never thought of going to sea until I convinced her it was a great idea (typical man).

Here she recounts her first sail across Bass Strait. I didn’t realise how frightened she was at the time. She now has thousands of nautical miles behind her and is an excellent skipper.


Watery Thoughts From A Country Girl At Heart

I was staring through the lifelines at the water rushing past the side of Crazy Lady our 36’ fibreglass sloop on our way towards Eden. I became aware of the realisation that the ocean was undergoing a definite change in character, and was it becoming more viscous?

Previously the watery playgrounds of some of the more pristine areas that we had visited further north were light, splashy and enticing, happy and almost playful. A holiday mood. No real fear of being “lost” and “out of sight” if someone should fall in.

I thought about the bloody slaughter of whales and the fragile men perched in open timber vessels, of the dead. I felt sad and also began to feel vaguely worried. We had brought grey skies with us. ”It’s just some rain” I thought, knowing that supplying and refuelling of the yacht would be much more awkward. But even at the anchorage in the still area the clear waters were a darker turquoise than I expected. A “wolf in sheep’s Clothing” as if trying to imitate the fancy colour of a memory that was once known and now corrupted by time.

If I knew the earth to be flat this water felt like the edge of the known world.

I could now see exactly why these waves troubled me. They were short and abrupt, a crisp navy in colour with a visible intense detail. They were without contamination of light or debris. They were the guards of the seas ahead. They were the military and we were in their zone. I could define the boundaries as we sailed through the checkpoint. These seas meant business. No games, no laughter, no frivolity, and no good times. Their white caps on the crests were clean cut and vivid, and did not integrate with the blue below.

I watched the land slip away and was astonished to note the ordinariness of the trees and cliffs. It had the appearance of a poorly worked landscape, a lazy artist who had smudged olive green and rust brown into the background by using a careless blending of the thumb.

I lay down in the lee-berth inside the warm cabin. I stared at the ceiling. It pulsated for a second or so. Was this a panic attack? I calmed my mind. We were about to sail over a very angry strait of ocean that had claimed many lives. Out of sight of land.

The next time on deck the ocean surface looked restless, an energy was being held firmly in place by a heavy handed ruler. No wave was individual but all were seething with a bad temper. The depth of this smouldering extended to hundreds of metres below our boat. I found a childlike comfort in focusing my vision on the rectangular frame of the lifelines, but not beyond.

The landing of fog around Crazy Lady came as a comfort. Bland weak wet grey mist everywhere. I could now easily deny the existence of all the outer watery unknowns. I was happy to be in this dangerous state of total denial, a good but bizarre place to live.

The calm waters of the fog looked thick, limp and oily. They irritated me. They seemed so fake. I knew it wouldn’t last. They meant something else was on the way. The fog lifted and the bland disappeared. I was bashed all night long, the wind was on the nose, a southerly that was not forecast had intruded my night watch and as helmsman I was on trial. This was not a time to call for Glenn’s help. I needed to prove myself worthy enough to commit this trespass. Determination, and protectiveness of my crew just kept me at the wheel.

I came on deck in the daylight. The water’s surface was now firm and alive, fit and active and very muscular. There were no longer any mindless threats by waves out of sheer spite. Flinders Island had been sighted. A friendly coast guard had called us by name. We were in the substantial Tasmanian waters, strong in body and robust.

I’m beginning to relax a little now. In writing this I’m trying to make some sense of all these raw new sensations. It’s been a bit hard for a country girl at heart.

Thanks Jen for allowing us to share this story.

Glenn heads up our office in South East Queensland.