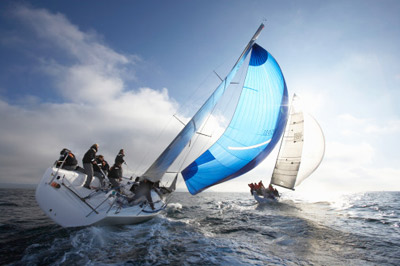 As the Rolex Sydney to Hobart Race 2014 beckons, many of the 100 plus fleet will be using the 180nm Cabbage Tree Island race on the 7th November as a much needed hit out for both boat and crew. With the entry level currently sitting at 40 boats, training and preparation is likely to be secondary to competitive match ups and yacht comparisons as owners evaluate and tweak all the winters, training, modifications and up-grades in order to gain those last few seconds per hour.

Whilst there will be plenty on during this race for all crews, a couple to watch out for will be Ray Roberts’ Onesails Racing Farr 55, previously Living Doll. This will be Ray’s first big outing for the boat since purchasing it earlier in the year. Ray and his crew are in great form after just knocking off the hugely successfully campaigned TP52 Beau Gest in the China Coast Regatta, Hong Kong.

The much loved and well campaigned LC 60 Vanguard (Dick Cawse) has two equally well known new owners in Michael Cranitch and David Goetz. The Cabbage Tree Island race will be their first big offshore hit out since purchasing her and undertaking modifications to better suit her for offshore racing.

The Bluewater Series of which the Cabbage Tree event is race number 4, has Sam Hayne’s Celestial very narrowly leading IRC, ORCI and PHS over last years Hobart winner Victoire with the Series Line Honours leader Ichi Ban in 3rd place. The series concludes with the Rolex Sydney to Hobart race, a compulsory race that’s results can not be dropped, and togther with the Bird Island race in December there is still plenty of opportunity for things to change.

We must also mention the following boats Black Sheep, Chancelor, Pretty Fly III, and Primitive Cool, all of which have Yoti have successfully placed with happy and competitive owners;

The 2012 race record holder, Bob Oatleys WILD OATS XI with a time of 12h-15m-55s, that’s a tidy average boat speed of 14.7knots. However given the speed potential these boats have, the door remains open to bring that time down further. Wild Oats XI will once again line up against Anthony Bells Perpetual Loyal to race for line honours. However come Hobart time there will be another 3 100 footers including Jim Clarks impressive new Comanche’ joining them plus some very fast Volvo 70’s that will make the battle for line honours potentially one of the best ever.

To all the Cabbage Tree Island competitors we wish you a safe and fast race.