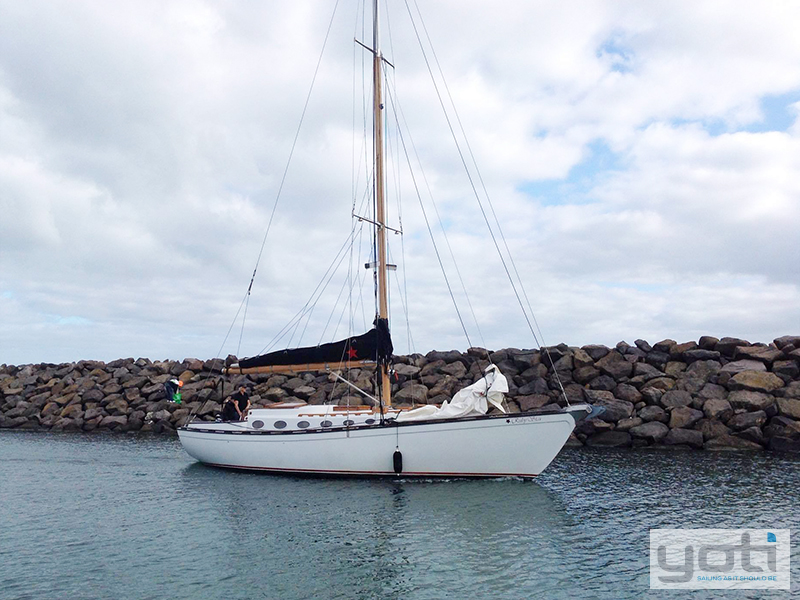 Ruby Star had been a ‘’twinkle in the eye’’ of owner Richard Frost for many years. Richard had previously owned and sailed cruising yachts in South Australia and when the opportunity arose to buy a new, beautifully built 40’ Roberts designed cruising hull in Honduras Mahogany he couldn’t resist the temptation.

The hull had been prepared by one of South Australia’s most experienced shipwrights and was meticulously hand laminated in 300 mm wide mahogany, triple planked diagonally using epoxy glues. The entire hull was then given 4 coats of epoxy on the inside and sheathed in Kevlar on the outside, both above and below the waterline. Virtually ‘’encapsulating’’ and forever protecting her timber hull from within and from the exterior. The fixed cruising keel was moulded directly to the hull, again immersing the entire lead shot keel in epoxy.

In 2004 Richard moved to Melbourne and trucked Ruby Star to the workshops of Master RN Shipwright Mr. Bill Jones to spend the following 3 years bringing her to completion. Bill had been recommended to finish Ruby Star as arguably the best timber boat builder in Victoria and came with 30 years of experience, which started as an apprentice working on Royal Navy timber boats in his home city of London.

As the Ruby Star build took shape her major design work above and below decks was where designers and shipwrights had the delight of working with some of the world’s most exotic and durable timbers which Richard had gathered in readiness. These timbers are now almost impossible to buy but Ruby Star was fortunate to be bathed in over one and a half cubic metres of Burmese teak which had been naturally dried and warehoused for over 5 years. The Burmese teak went into 12mm thick decks, cabin hatches, cockpit combings, dorado vents and the most effective toe rails and deck finishes imaginable, all with West System epoxy glues.

A further cubic metre of the best ‘’furniture grade’’ Honduras mahogany was used in her interior – bench tops, tables, doors, grabrails and cabin soles were bespoke by Bill and his craftsmen.

Her deck hardware was hand carved and built in timber before being sent to Australia’s most experienced bronze casting company for casting in bronze and hand polishing to a beautifully enriched chrome finish.

The mast and boom were built by Bill and his team in Douglas Fir which was hand laminated and both have hollow interiors to keep weight down while adding strength. The rigging was designed and built with cruising the southern ocean waters in mind and has double spreaders all connected with handmade stainless steel or chromed bronze fittings.

Richard has since tested this rigging with a trip from Melbourne to Port Lincoln in South Australia, when heading back from S.A. faced a 50 knot westerly gale on her maiden Southern Ocean cruise.
‘’Her sea kindliness in this storm was remarkable as we surfed east at 9 knots plus in 6 metre seas with a storm jib and 50 knots on our stern quarter. About 200 miles south of the Coorong in the Southern Ocean.’’

Interior comfort was added to with the addition of an internal combustion heater in the cabin. This interesting unit was purchased on a special trip to the Isle of Wight in the UK. The heater takes timber or charcoal and adds a coziness to Ruby Star that is rare in any cruising yacht. Along with the heater, her ships clock, barometer and compass were purchased from Europe’s most respected ship’s outfitters.

To look at Ruby Star it is difficult to imagine this ‘’mid 1900’s‘’ solid timber beauty was only just built! To sail with her North cruising sails, or power along at 7 knots under the steady throb of her 30Hp Yanmar, takes on a feeling of security in the strength and integrity of this custom made ocean crossing sail boat.