Mahini is a picturesque 68Ft Herreshoff staysail schooner launched in 1990. She sat idle for over three years and the work to ready Mahini for her trip home to Sydney actually had taken about 3 months, now things were starting to liven up around the boat the tradesman were trying to finish all their tasks by our desired deadline.

And the pressure was on when I arrived to prepare her knowing that we had a weather window coming up.

Being a delivery Skipper, I always like to arrive a few days earlier to go over and prepare any Vessel but Mahini is special. I have an affection for well built timber Yachts, Spending time on her was easy for me. I had already sailed her a few months earlier with Andrew the owner, but now Doyle’s had fit her with new sails, so I was excited to testing them.

We dropped the lines and hoisted every sail to a soft 10-12kt NW early on Friday morning so we would arrive at the heads during an outgoing tide. Deciding to use South Channel and after a perfect sail down the Bay we travelled through the heads on the last hour of an outgoing tide with full sails travelling at 10.2kt and clearing point Nepean by 1500hrs it was a dream exit farewell Melbourne and thank you.

We travelled along the coast towards Cape Liptrap wind still averaging 12-14kts from the NW, with a boat speed of around 7-8kt, giving us time to have dinner and settle into our shifts for the night. Around 3am we started our approach for rounding Wilsons Promontory and by 0900am we were past Cliffy Island heading towards the Oil Rig of Lakes Entrance still with a NW 12-15kts and flat sea conditions, we are not stopping at Refuge cove with these great conditions. The water around us came alive with at least 70 Dolphins heading for our Bow and putting on a spectacular show, I never grow tired watching then play. You can see the video here.

By 16:00hrs still the breeze was in our favour, we had Kingfisher Oil Rig on our starboard side while passing the rest at night with all their lights on making for a great view.

We were Heading for Point Hicks and during the night wind was 16kts fluctuating up and down and shifting to the North a little, we had already reduced our sails but still making good time with the Genoa and motor. Off Point Hicks at 0500hrs the wind had dropped to 10kts from the north, it wasn’t going to be any help around Cape Howe.

I enjoyed sitting up on the Bow watching a beautiful sunrise, just east of the New Zealand Star Banks and was watching a few fishing boats trawling south come past on our Portside, then as the sun continued to rise I then spotted in the distant my first Whale Breech for the trip, then it happened again and the waters came alive with Whales everywhere I looked. They were playing to the morning sun, and for the whole day we seemed to be surrounded by Whales and dolphins.

I was tracking on AIS two vessels travelling North behind us doing a few knots more in boat speed and following a simular course, one was a tug boat and the other a small cargo ship, eventually they would pass us and it would be at night so nice to keep a eye open on them.

At 02:45 we set our approach to sail inside Montague Island and by 08:00 we were off Batemans bay 11kts of wind on the nose, during the day though the sea and wind was starting to build and by 14:00hrs of Ulladulla wind was 23kts with 2mt sea conditions our speed was down but we didn’t feel unsafe. This was not in our favour. By now all the sails were down we tried coming of the breeze with the genoa but it made little difference just being slowed by the sea state. We started looking for options, I wasn’t comfortable entering Ulladulla as the sea would be on our stern entering port and Mahini doesn’t manoeuvre that well in tight spaces, so the decision was made to carry on the Jervis Bay for another few hours then anchor and wait it out.

Our night at anchor in Jervis Bay gave us a well-needed rest, as we sat alongside the tall ship James Craig who was also there for the night.

Next Morning the weather report showed that we had these conditions for at least another 12hrs, then the breeze would turn west after Lunch and continue southwest Perfect.

16:00hrs we lifted anchor after the worst of the strong Westerly’s went through and with 18-20kts on beam we headed up the coast to Old Sydney Town.

The breeze 15-20kts in the West just making for a great ride past Port Kembla where the AIS and Radar helped us navigate past a busy area of anchored Ships 04:00 our timing was perfect we were of Botany Bay, wind had dropped to 10kts we were at Sydney Heads 05:55 right about Sunrise, being meet by the Manly Ferry once inside tiring up at Royal Sydney Yacht Squadron. 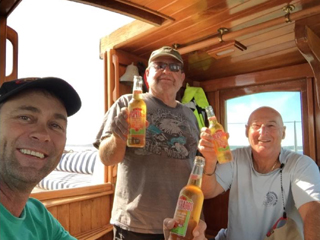 I never ever take Port Phillip Heads or Bass Strait for granted and that the first 2 days of this trip were important but the trip was one of the most memorable trips I’ve had with a Yacht that is this well built and well equipped to do a trip anywhere your heart desires.

Thank you Andrew, my friend, for trusting me to sail your Beautiful Yacht home to you. Mahini is one of the best boats I’ve sailed offshore.