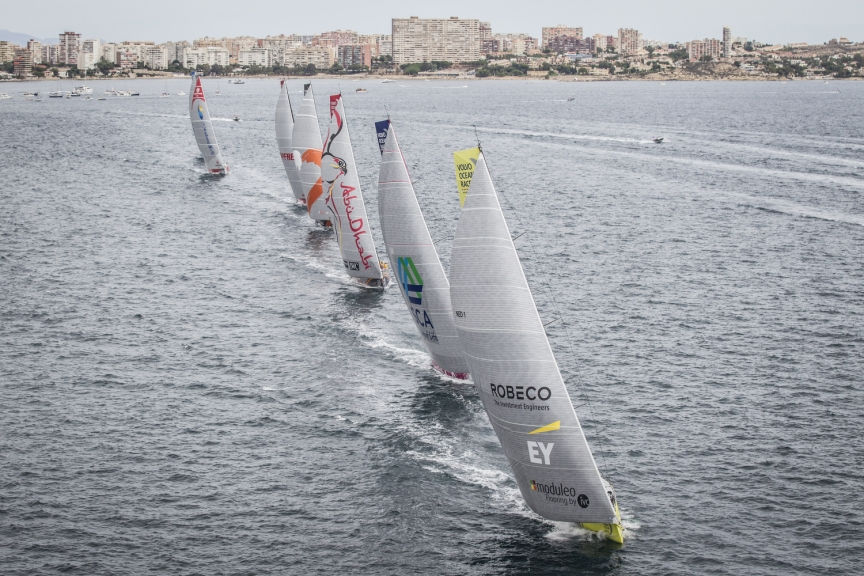 Well it’s that time again, the 12th version of the premier global yacht race; which at its inception was known as the Whitbread round the world race. Beer sponsors have been swapped for safe family cars and it is now the Volvo Ocean Race.

So at the YOTI blog this week, with the race just under way, we investigate in lieu of an Australian boat, who do we root for?

There are Australians on 5 of the 7 boats and no Kiwis on the two remaining just in case we were looking to do a bit of bandwagon jumping.

Team Vestas Wind would seem to be the obvious choice with an Aussie skipper in the form of Chris Nicholson. Although hugely experienced and with a great crew TVW was very late getting their campaign up and running and this showed with their last place in the first in-port race. These races only start to matter if there is a count back and are not in any way reflective of most of the main race, but a better result would have been moral building if nothing else.

The first of the new Farr designed 65’s to be launched was SCA. With three Australians among a relatively inexperienced crew they have had a lot more prep time than most. Lead by Sam Davies, who got 4th in her first Vendee Globe (in an old boat to boot) Sam is a bit of a superstar in her adopted France. Speaking fluent French while laughing and grinning her way around the world she was in stark contrast to the surly mostly French skippers in that iconic race.

Team Dongfeng has foolishly gone for a total Northern hemisphere crew so they have no chance.

Team Mapre are worth keeping an eye on. Having two South Americans on board is better than nothing and in the form of Michel Desjoueaux their slipper Iker Martinez has one seriously qualified watch captain. Desjoueaux is a legend of solo sailing in France. Twice a winner of the Vendee he once restarted his engine with no battery power. Using an ingenious system of ropes and winches this and his studious nature gained him the nicknamed of “the Professor”.

Of the remaining three teams two, Brunel and Alvimedica only have one Australian on board. Andrew Cape and Will Oxley are vastly experienced and interestingly both Navigators.

Team Brunel are a crack team at the hands of Volvo veteran Bouwe Bekking. Bekking is going around the world for the 7th time and is class act.

Alvimedica have the youngest skipper and the youngest crew. Their lack of experience will probably count against them but are one for the future.

Last but not least is Abu Dhabi. Its skipper is a Brit so hard to get behind, but they do have two Australians on board. The team are incredibly well funded and are rightly one of the favourites.

So who to shout for? My prediction is Team Vestas. After a slow start I think Chris and his gang will come home strong. This race is all about endurance and keeping the boat relatively intact. Nicholson has proven he can do this and the one design nature of the race will suit him.