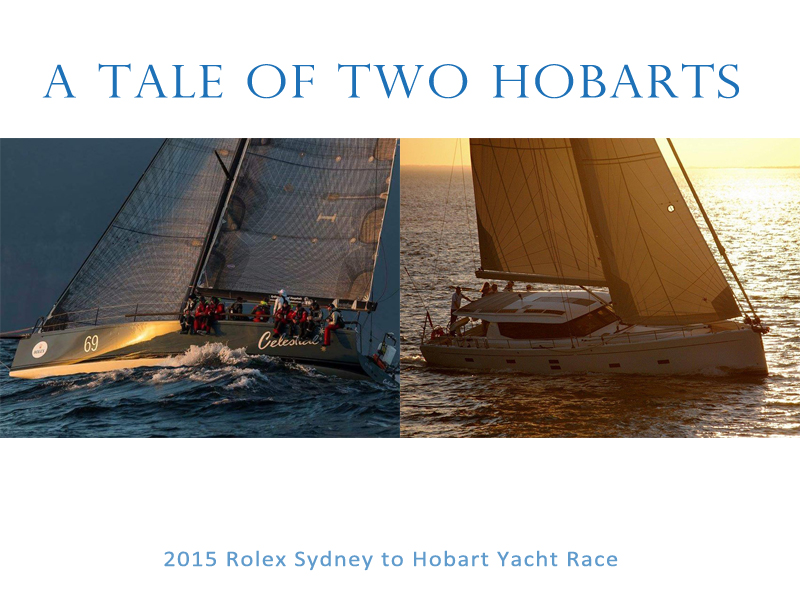 In year’s past there has generally been one of the YOTI crew represented in the Sydney to Hobart Yacht Race. In the 2015 race we were fortunate to have two, David Burt of YOTI Race and Jeremy Larkin from YOTI Melbourne. Their experiences were vastly different and they have shared their experiences with us below.

Morning on the Dock
Relative calm. Final discussions with key decision makers as to our final selection of sails to take. IRC rules state a maximum number of headsails and spinnakers. We need to ensure we have the right combination for the upcoming conditions, we don’t wont excess as that is extra weight but we need enough to be sailing at optimal speed at all times.

Clothing for the race is your full wet weather gear plus one small water proof bag. The bag fits at set of thermals, beanie, head torch, dry socks and very little else. The other decision is shoes or boots; you can’t take both, most go for their boots given the forecast decision.

Pre start
As with all the boats first thing first, complete safety briefing by the boats safety officer. A settling talk by the owner/skipper as to crew roles, race expectations and goals. Navigator gives a weather over view for the race and then more specifically what we can expect for the start and the first couple of hours. “ Check In” with the Race Committee Start Boat with all our storm sails up and in full working order. Sail over start line and down harbour to assess condition and decide on final sail selection. With sail selection made go for sail and make sure boat is tuned for those sails. Back to start line to “ping” this gets GPS points at either end of the line. This is utilised to established favoured end and know time and distance to line at any stage.

The Start
Bang! That’s the 10 minute gun and it’s all business now. The crew know from this point to minimise conversation, to listen for the calls of the tactician and Skipper, ideally the only ones talking. They have decided on mid start line and search for clear air, considered conservative but safe, you can’t win a Hobart at the start but you can loose one. (Regrettably too many found that out this year). Less than a minute to go and we are heading to the line in slow mode, we have “time to burn” but Ragamuffin 100 is above us and coming in fast, we close up the gap early to ensure she ducks us, and she does. Down to less than 10 seconds and we are more congested than we had hoped, nothing to do now but set sails and go as fast as we can. BANG and we are off but we are overlapped and therefore slow, this is not ideal so we slow further and make room for a port clearing tack to the eastern shore. This pays off and we get safely away from the start in clear air and out to sea well above mid fleet and right with our rivals.

Downwind running in 20-25kts NNE
Ahhh! Out of all the harbour traffic and getting out to sea. As we have a building NNE expected to get to 30kts (we hope) we set the A4 and a spinnaker staysail and now enjoying the ride. Unless you are on the pumps (pedestal Grinders) as you are working flat out maximising every wave and opportunity to keep the boat up on the plane. We settle into this mode sailing at an average of approximately 20kts with some nice runs in the mid-twenties. The other challenge with this boat is keeping the nose out of the wave in front, it loads up the rig and obviously slows you down, not to mention the 2-3 feet of green water that runs over the deck. This is where you find out who has the cheap wet weather gear!

Southerly front hits 35-45Kts SSW
The forecast has been pretty consistent over the past couple of days and both commonly used models were relatively aligned. So we knew that by 2130 – 2200hrs the first night we will be hit by the Southerly front moving up the east coast of Australia. This is certainly not uncommon on the east coast of Australia but routinely there is a transition between the Northerly and the Southerly of 30 -45 minutes where the breeze dies out and shifts around. What happened with this one on a cloud covered night (hard to see the Southerly front cloud formation) was very different. There was no real transition, within less than 5 minutes of 20-25kts from the North we had 30-40 knots from the South. Given what we had expected we had the no 5 Headsail already plugged in ready to go, however we still had a the kite up and a full main, this created some pressure on the crew to get the kite inboard and reefs in in gusts of 40kts before we damage the sails, the helmsman at the time did a great job of balance and steering the boat whilst this was successfully completed with no damage by a competent and well trained crew. Within 10 minutes we had the correct sails set and now bunkered down to what would be another 23hrs of 35-45kts of breeze and 4-5 meter sea way. It was this change without transition that caught many boats out and lead to many retirements.

All these things as strange, uncomfortable and out of the ordinary they are, but shared and conquered with other like-minded people is what brings many of us back to this great race year after year.

Galley (Kitchen) that is it folks! One only gas gimballed burner feeding 13 crew. Food for main meals is freeze dried, simply boil water, add to packet and wait 10 minutes, and yes it’s as tasty as it sounds. We eat with a plastic “spork” (combined spoon and fork). There is only one per crew member on board, so don’t loose it. There is no fridge, so all other food needs to be non-perishable.

This is luxury, electric carbon toilet, privacy equals nil. Note that is the water maker bolted to the wall next to the head as it shares the water intake, less through hull fittings. Rest assured it has been plumbed in in such a way there can be no “errors in flow”, that’s what they told me anyway.

Bunks, hard to see in the picture but my bunk (known as the suicide bank is up through that aft bulkhead) its considered luxury as it is the only bunk that fits a 6 foot tall person. Every tack or gybe you must clamber over and around the steering quadrant and assortment of traveller, outhaul and cunningham lines which run to a centre cockpit console, to get to the high side. Sleeping on the low side in any sort of breeze is absolute taboo and likely to shorten your racing career. I was thrown out of the bunk on multiple occasions given the sea state on the first night. There are no interior lights in this area, head torch mandatory.

My first Sydney to Hobart ended on the second night of the race 60NM north of Eden. Whilst hugely disappointed to not make it to Hobart it was an extraordinary experience in many differing ways.

It would be fair to say the boat I started the race on is as far from your standard S2H yacht as it is possible to get and most certainly at the other end of the spectrum from David’s TP52 Celestial. My ride was a Moody 54DS owned by RBYC member and YOTI customer Grant Dunoon. Grant is a very experienced ocean sailor who approaches ocean races as a challenge and experience rather than a win at all costs sports event.

Comfort and an enjoyable time are the order of the day on Try Booking and the menu has as much time spent on it as the boat. During our qualifying race to Stanley (TAS ) Grant tried out a few new dishes and the Lentil curry soup was a personal highlight. Éclairs and chocolate cakes have been cooked from scratch in the past and I was hoping for a repeat performance from our cook/skipper.

I arrived in Sydney with most of the other crew on Christmas day and the CYCA was surprisingly quiet. It quickly dawned on us that most of the Sydney crews would, of course, be still at home with their families. We started ticking off the list of remaining jobs in-between visits from other Melbourne crews and various hangers-on. The forecast southerly change on the first night was on everyone’s mind so we attempted to arrange the forward sail locker in a logical order as well checking the boat over and doing a test hoist on the storm sails. This is a requirement for the start and the experience would prove useful the following day.

The start of the race is exactly as everyone describes. The start line is actually quite small and the gap between the spectator boats very claustrophobic with that number of boats. A lot of boats from the first two start lines (we were on the 3rd) drop back making our area even more congested. The stress and pressure of the occasion certainly gets to some as the several crashes attest. The noise level is extraordinary and only adds to this stress. At 27tonnes our boat isn’t the most manoeuvrable so we sat well back and took a very conservative approach. We got a very average start and started tacking up the harbour. We were staggered to find ourselves passing several of the Clipper RTW boats. They are not designed for up wind sailing but it was still surprising. As we left the heads the fleet spread out the helicopters and spectator boats rapidly leave.

As with every other boat our Navigator had weighed up all the options and decided on an inshore course for the first 24hrs. With pretty strong Northerlies behind us we made pretty good progress until 10pm that night when the front hit. The crew on deck saw it coming but like a lot of other boats were caught out by how quickly the wind swung around. Northerlies became 45 knot southerlies within the space of 20 minutes.

The noise woke me from my bed and I came up to help get a wayward headsail under control. Unfortunately it tore before we could get it furled away. The sea state at this point was pretty extreme and this brought on a bit of sea sickness amongst the crew. By daylight we were trucking along nicely with a reefed main and our storm headsail. The wind had eased to high twenties with daylight making the waves easier to negotiate. The odd rouge wave kept us on our toes with one particularly nasty one washing me off my feet whilst at the helm.

By sunset we had been lifted about 20 degrees and were almost pointing due south. The whole crew were feeling better and planning on getting a kite up as soon as the next change came through. Around 10pm that night a heavy slamming was detected from the bow locker. The bow thruster was the main suspect but a visual check revealed nothing. The slamming would definitely have done damage had we continued so the decision to retire was an easy one.

The real shame of it all was that we had come through the worst of it and as a crew overcome several problems in some extremely challenging conditions. We lasted longer than some very classy outfits and were surrounded by some much more experienced boats when we returned to the CYCA. So despite not making half way it was still an extraordinary experience and much thanks must go to Grant and the rest of the crew.